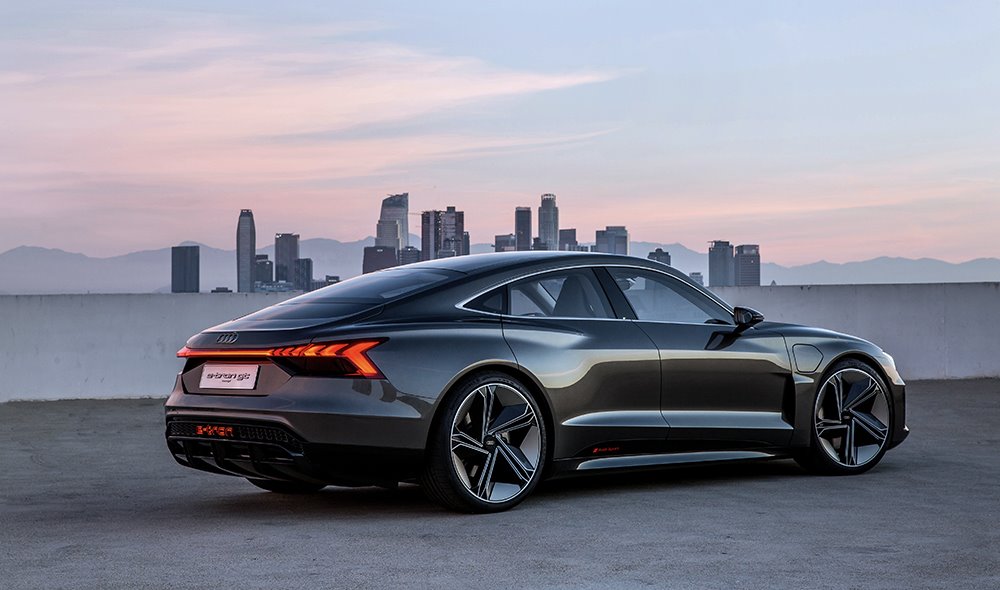 For all of that money, buyers will get the most performance that Audi has squeezed out of an electric car to date. The standard E-Tron GT can output 350kW of power, or roughly 470 horsepower, while the RS version boasts 440kW, or about 590 horsepower.

In overboost mode, those numbers jump to 522 horsepower and 637 horsepower, respectively. With overboost and launch control, the E-Tron GT can sprint to 100 kilometers per hour in 4.1 seconds, and the RS version makes that run in 3.3 seconds. Not bad for a car that weighs about 5,100 pounds.

Both models achieve that performance with a dual-motor, all-wheel drive setup that’s powered by a 93kWh battery pack (with 85kWh of usable energy). The battery pack uses 800-volt technology, too, which not only lets the GT perform at high levels but will also enable faster charging. Audi says just five minutes will recover 100 kilometers, or 62 miles, of range when hooked up to a high-speed charging network like Volkswagen’s Electrify America.

If those numbers sound familiar, it’s because it’s the exact same setup as the Porsche Taycan. That was the plan from the jump when the GT was first revealed as a concept car at the 2018 LA Auto Show and even made an appearance in Avengers: Endgame.

Much like how the larger Volkswagen Group will share the German automaker’s mass-market MEB electric car platform, the powertrain that was developed for Porsche’s first EV was made available to Audi for the GT, which will exist as a halo vehicle of its all-electric E-Tron brand. (To wit, it will even be built on the same assembly line as the R8 sports car.)

Audi says the base E-Tron GT should get “more than 488km” (or 298 miles) of range on a full charge, though that’s according to the European WLTP testing standard. In its US press release, Audi cites a 238-mile range for the standard GT and a 232-mile range for the RS, though those are not official EPA range estimates.

Despite being such a pricey car, the base E-Tron GT’s price tag will climb even higher for buyers who want the German automaker’s most advanced tech. Audi’s Matrix LED headlights, which have a complex mirror system that can shape the light in highly specific ways, are an option (though only in Europe).

There’s also an optional heads-up display that can project information onto the windshield. All-wheel steering is available, but only as an option. Bang & Olufsen sound system? Optional.

The more expensive RS model includes some of these features, though its price can also jump depending on which wheels are fitted or if the buyer opts for a carbon-fiber reinforced roof over the standard glass option. Noise-insulating glass on the side and rear windows are also an option, as are massage seats.

Both E-Tron GTs come fitted with two displays — a 12.3-inch digital instrument cluster and a 10.1-inch touchscreen — that are powered by the latest version of Audi’s infotainment system. That means there’s an LTE Advanced chip for onboard Wi-Fi connectivity, navigation powered by Here maps, a companion smartphone app for controlling door locks and other functions, and wireless CarPlay and Android Auto.

In total, the E-Tron GT is the most loaded up electric Audi to date. It’s the kind of thing that could properly compete (in some respects) with Tesla’s new refreshed Model S, and it gives deep-pocketed customers the option of Porsche Taycan-level performance in a different package.

Audi has already shipped tens of thousands of E-Tron SUVs and Sportbacks, its first electric models released in the wake of the Volkswagen Group’s Dieselgate scandal. But the extra capability afforded by Porsche’s technology could help the automaker steal away luxury car buyers who were previously put off by the lacking range of the original E-Tron (or its most direct competition, the Mercedes-Benz EQC).

Beyond that, the E-Tron GT will now serve as the standard bearer for Audi’s push into electric vehicles, the car that all other Audi EVs will be measured against as most customers inevitably settle for something more attainable.