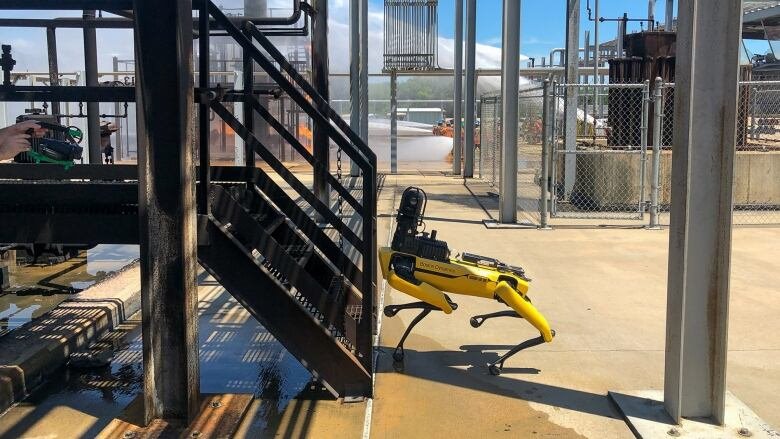 A dog training academy is teaching new tricks to a pair of very special dogs and their human handlers at Shell's Scotford Complex. But with their abilities to open doors and take photos, the four-legged robots named Bolt and Gadget are clearly a cut above the average canine.

"The intent is to use them for some basic maintenance inspections," Conal MacMillan, the company's external relations manager. "We'll be able to program them to their own custom routes to test our plant conditions, to help us out with some security tasks and if needed — hopefully not — perform autonomous emergency response missions on our site, too."

The robots are part of the bright yellow Spot line of quadruped robots made by Boston Dynamics, a company that was spun out of MIT in 1992 and is now owned by Hyundai. The Spot robots became commercially available in June, priced at $74,500 US.

The robots, while headless, have doglike attributes that become more pronounced when they start moving. "Once it starts moving around," MacMillan said, "it would look 100 per cent like a dog." MacMillan said one robot has 360-degree visual and scanning capabilities, with a camera mounted where its head would be. The second has attachments that give it the ability to manipulate items and perform tasks.

They have heat detection capabilities and can do 3D scans of equipment that could be digitally mapped using computer software, he said. "The possibilities right now are endless, in terms of what it could do," he said. "But until we actually know how to manipulate the arm and use that bot more effectively, it'll be small, incremental steps to start out. And will grow it and learn more as we move along.

"So right now, like I said, he can open the door, he could dig a hole and probably hide a bone."

The robots can be operated in two ways. A remote handler can guide its movements with a controller similar, except for the embedded screen, to what you would use for an XBox gaming system. The robots also have machine learning capabilities, meaning they can be taught to operate autonomously, he said.

Employee safety is the primary reason for adding ground robots to Shell's suite of technological assistants, which also includes drones for aerial inspections and robots that clean the inside of the refinery's massive tanks. "In the past, we might have had to put somebody in a situation where we had to de-risk it with scaffolding or PPE or different layers of safety barriers," he said.

MacMillan said Shell is actively bringing more innovative technology into its operations. Scotford is one of two Shell sites — the other being its Pernis refinery in Rotterdam — with robotic dogs.

Much of the training, expected to continue through the first quarter of the year, is geared toward familiarizing the human handlers with the robots, MacMillan said. The plan is to unleash them in Q2. Training is taking place away from the Scotford's refinery, upgrader and chemical plant in Fort Saskatchewan, which is restricted to essential workers as a pandemic precaution.

But curiosity among employees is still very high, he said. "There's definitely a general level of excitement and interest in seeing what these dogs can do — and what they're going to look like when they're doing it."