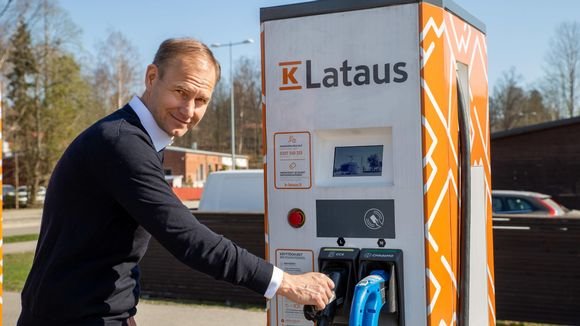 The number of fast charging stations for electric cars is set to grow rapidly this year. The largest charging networks are planning to open new stations, while the S-Group rolls out its own network at ABC locations.

Its first new stations, in Helsinki's Pukinmäki and Itäkeskus neighbourhoods will be tested soon, while others are already located on motorways. Rapid charging – which can typically restore a car battery to 80 percent capacity within as little as half an hour – is crucial for the feasibility of long-distance travel with electric cars and trucks.

"The construction of the network has started in the Helsinki metropolitan area, and plans are well under way elsewhere in Finland. There are about 50 charging stations in various stages of planning this year, says Tiina Viksten, Development Director of the S-Group's ABC chain, which has combined petrol stations, cafés and minimarkets around the country.

By 2024, there should already be about 1,000 ABC charging stations across the country. They will be at S-Group sites including supermarkets, ABC locations and hotels. "Our goal is to create a significant network throughout Finland. Our plans are based on forecasts of the electrification of the nation's cars," Viksten said.

For several years, the K-Group has had its own K-Charge network, which has charging points across Finland, mostly outside large grocery stores. The K-Group says that it is Finland's largest fast-charging network.

"An electric car charging station will be installed at each of our new stores and we will also add them to the parking lots of existing stores, so that by the end of 2024 all of our nearly 200 stores will have stations," said Kaikkonen.

Other nationwide charging networks, operated by Virta and Recharge Finland, are also growing quickly. "This year, more than 50 new fast chargers and several hyperchargers will be added to our network," said Aleksi Patana, Country Manager of Virta, which bills itself as Finland's leading EV charging network.

Virta chargers are owned by local power companies or property owners. Virta manages the chargers' app and back-end systems. Country Director Sami Saarilahti from Recharge said that this year the firm plans to build rapid and even faster hypercharging points at several dozen sites in Finland.

Recharge builds and owns its charging points itself. The network includes chargers previously built by Fortum, which the majority state-owned energy giant sold to Recharge a year ago. They can still be used with the Charge & Drive app maintained by Fortum. According to Saarilahti, Recharge intends to particularly expand its hypercharging network to support motorists driving long distances.

The city of Helsinki's energy utility, Helen, also plans to expand its charging network. Already this year, Helen has installed rapid chargers at Citycon shopping centres. "Helen's goal is to grow its charging network nationwide to more than 1,000 points by 2025 and to be one of the leading service providers nationwide," the company said in a statement.

Charging companies declined to disclose the exact size of their investments. According to von Bonsdorff, setting up a new charging station usually has a six-figure price tag. Based on the price range of the chargers and the planned numbers, Yle estimates that various companies plan to spend more than 10 million euros on new stations in Finland this year.

According to a report by the Technology Industries of Finland, there were 365 rapid charging sites at the end of last year. This year, that number could increase by as much as 300, almost doubling. Tesla stations are not included in these figures.

Whereas in the past many charging stations only offered one rapid charging point, now more stations will feature several to avoid queues forming. With K-Charge, there are usually already two rapid chargers at each location. Each S-Group station will typically have 4-8 points.

K-Charge has been building its fast charger network since late 2018. It now consists of more than 100 rapid chargers in different parts of the country. "In this way, a motorist making a longer trip can rely on having a charging station available at a desired stop," said ABC’s Viksten.

According to von Bonsdorff, the K network sometimes experiences congestion on sites near motorways during the busiest holiday periods. "We are happy to see that competitors are entering the field and that the entire charging infrastructure is growing. If we want to meet the emission reduction targets for transport, we need a lot of electric cars and charging stations," von Bonsdorff said.

The government has set ambitious targets for the electrification of road traffic, but there are so far only just over 10,000 all-electric cars in Finland, far fewer than in Sweden and Norway, for instance.

"Charging stations alone is not such a great business yet, because building infrastructure is expensive and takes a lot of money. However, we see this from many angles: this is a service for our store customers, and responsibility is also important," von Bonsdorff said.

According to the K-Group, fast charging volumes rose by 130 percent in January-March compared to the same period last year, although the size of the network has remained almost the same.

Unlike most competitors, charging at Lidl is still free of charge. According to Lidl, the company aims to help low-emission driving become possible and effortless throughout Finland. Recharge's Saarilahti also believes that investments must be made now, especially with a view to the coming years.

"Revenues do not yet cover expenses at this stage; operators must have significant financial resources. This is especially true when it comes to a comprehensive network at the national level, as well as hypercharging in general," Saarilahti said.