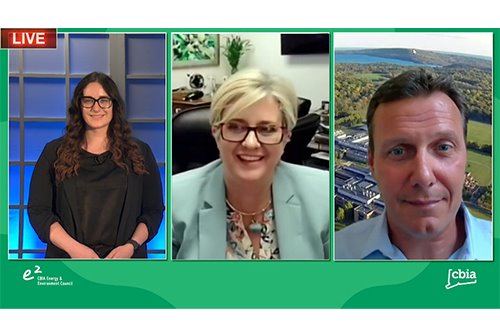 ExxonMobil may be a leader in research and development into carbon reduction technologies, but they know they don’t have all the answers.

That’s why the company partners with smaller companies, including Danbury-based FuelCell Energy, to develop technologies that reduce carbon emissions.

“We collaborate with companies like FuelCell and it’s been a very good collaboration,” Andrew Sinclair of ExxonMobil said June 11 at CBIA's 2021 Energy & Environment Conference.

“They’re not the only company we partner with, but it’s an example of a smaller company that is on the cutting edge of R&D and energy development.”

The partnership between the companies began in 2016 and they are now in their second joint development agreement, said Jennifer Arasimowicz of FuelCell.

She and Sinclair discussed the joint effort to develop new technologies.

“Our carbonate fuel cells are installed in multiple types of configurations,” she said. “They take any type of a methane-rich fuel—whether it’s natural gas, propane, landfill gas, biogas—and through a chemical conversion with no combustion, turn that into electricity.”

Their fuel cells at wastewater treatment plants take the gas from plant digesters and use it to produce electricity.

FuelCell Energy's technology takes any type of methane-rich fuel and turns it into electricity.

The process creates thermal energy that’s also put to use.

“We have multiple installations that serve as combined heat and power units,” Arasimowicz explained.

For example, heat from FuelCell installations at a Pepperidge Farms bakery in Connecticut is used to preheat ovens.

ExxonMobil’s work on carbon capture is part of a longstanding effort to reduce its carbon footprint, said Sinclair, the company’s manager of Northeast Public & Government Affairs.

“These are not lofty targets—we have developed aggressive plans to mitigate emissions.”

“Carbon capture and storage is front and center, the premier suite of projects that we’re looking at,” Sinclair said.

Sinclair is located at ExxonMobil’s Global Innovation Campus in Clinton, N.J., home to over 1,000 scientists who work to address the dual challenge of energy providers—meeting the world’s growing demand while lowering emissions.

They are working on reducing emissions from things that would be difficult to electrify—aviation, heavy trucking, and shipping.

“There’s not a line of sight to scale on for an electric Boeing 737,” he said. “We do not have a scalable technology for long-haul trucks and the same for [shipping].”

ExxonMobil is developing a process that uses algae for fuel production.

So ExxonMobil has focused on biofuels—adding a bio component to a diesel fuel to greatly reduce its carbon footprint.

They are also developing a process that uses algae for fuel production.

Its benefits include not competing with corn, a food source; it can grow in brackish water so it won’t strain fresh water sources; algae consume carbon dioxide, have a much lower emissions profile, and yield more biofuel per acre than plant-based biofuels.

The unique collaboration between ExxonMobil and FuelCell began a few years ago when scientists from FuelCell gave a presentation on their efforts.

In the audience were scientists from ExxonMobil. Afterward, they struck up a conversation.

“It was a bunch of very smart scientists getting together in a room, realizing they were thinking the same thoughts, and working on the same technology,” Arasimowicz said. “We decided that a collaboration made sense.”

"Collaboration and this notion that we're in this together is deeply embedded in what we're doing."

And as big as ExxonMobil is, Sinclair said, “we know we don’t know it all—so we look to other companies and academia.”

“Collaboration and this notion that we’re in this together—let’s work together to develop these scalable solutions—is deeply embedded in what we’re doing at ExxonMobil.”