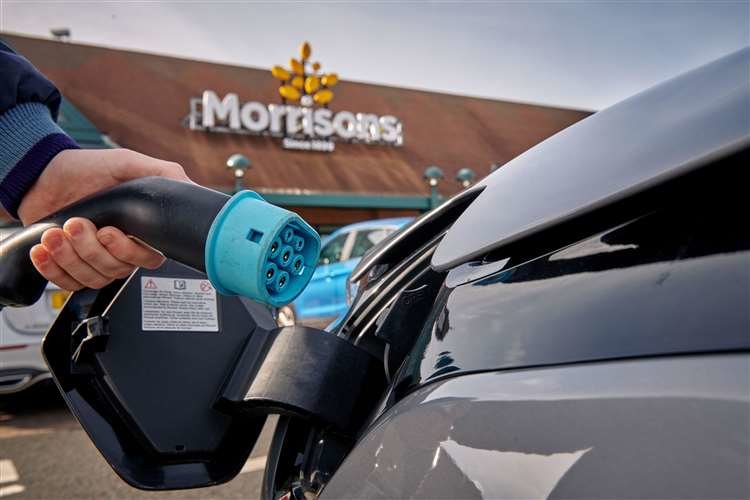 Morrisons, which has 497 branches nationwide, has confirmed it will spend the next year adding more rapid charging points to its car parks for those who drive electric vehicles in order to build the biggest supermarket charging network in the UK.

The new charging points are said to charge electric cars six times more quickly than standard points, and will allow customers to go from a flat battery to full charge in under 45 minutes while they nip through the aisles or grab a bite to eat in the supermarket cafe.

A typical 30 to 40 minute charge using one of the new planned charging points, says Morrisons, should give drivers around 100 miles of travel range.

Morrisons, the UK's fourth biggest supermarket, has partnered with company EQUANS for the expansion. It says customers will never be more than 50 miles from one of its rapid GeniePoint charging points under the plans now being rolled out.

A confirmed list of stores to receive a new charge point have not yet been released. They will be located, say those behind the project, around the perimeter of Morrisons car parks to ensure they are available to those who need them but do not prove to be an obstruction to other customers and will join 200 charge points already in operation.

The announcement comes just days after Waitrose confirmed it would be installing 100 charging points to stores by 2025 in a partnership with Shell.

Andrew Ball, fuel and services manager of Morrisons, said: "We know customers don’t want to spend hours waiting for their cars to charge, which is why we’ve made the decision to install the next generation of rapid chargers.

It’s important that we continue to offer our customers the convenience of charging their EVs as they shop or eat with us." All of the electricity used for charging will come from zero-carbon energy sources like wind and solar says Morrisons.

Recent figures from the Society of Motor Manufacturers and Traders suggest there are now more than 450,000 electric vehicles on UK roads.