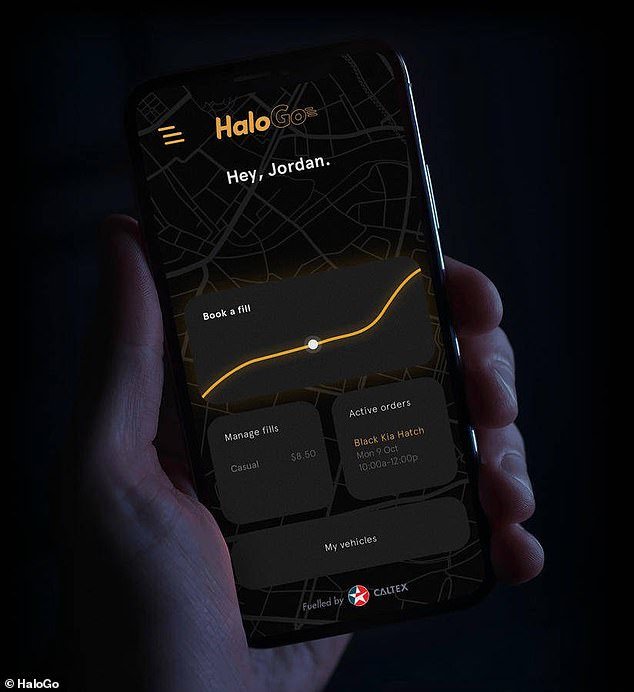 New petrol delivery app HaloGo is set to launch in Australia in March 2020 and will save you the trip to the service station by bringing it to your own driveway.

The app is the brainchild of mum-of-three Brigid Shute, who was inspired to start the business after seeing a similar service operate overseas. The 45-year-old, from inner-west Sydney, said HaloGo will be especially convenient to parents of young children.

'When I had three young children I found going to the service station quite a stressful event, so when I found this concept I just knew I had to make it work in Australia,' she told Sunrise.

Like other popular delivery apps such as Uber or Menulog, HaloGo will allow users to order a fill up by scheduling one when needed on the app.

Staff will then arrive at your location and fill your car up in just minutes. Customers don't need to be at their car, or even at home, during the service, and are just required to leave their fuel tank slightly open for a team member.

Whether HaloGo will be more affordable than going to the service station will depend on how frequently you use it. 'It was really important to us not to add extra costs to the fuel because the cost of the fuel is a really important part of the purchasing decision so we do charge a small service fee,' Ms Shute said.

Ms Shute said customers will be charged $8.50 for every fill-up, but that fee will be reduced if they opt to schedule regular services. The idea is three years in the making and is finally coming to fruition after the company teamed up with Caltex Australia.

Ms Shute, who has a background in strategy and marketing, admitted her plans were not fully embraced initially when she announced she wanted to become a 'fuelpreneur.'

HaloGo will be regulated by the same governing bodies that oversee ordinary patrol stations and services will be carried out by a team of highly-trained staff members.