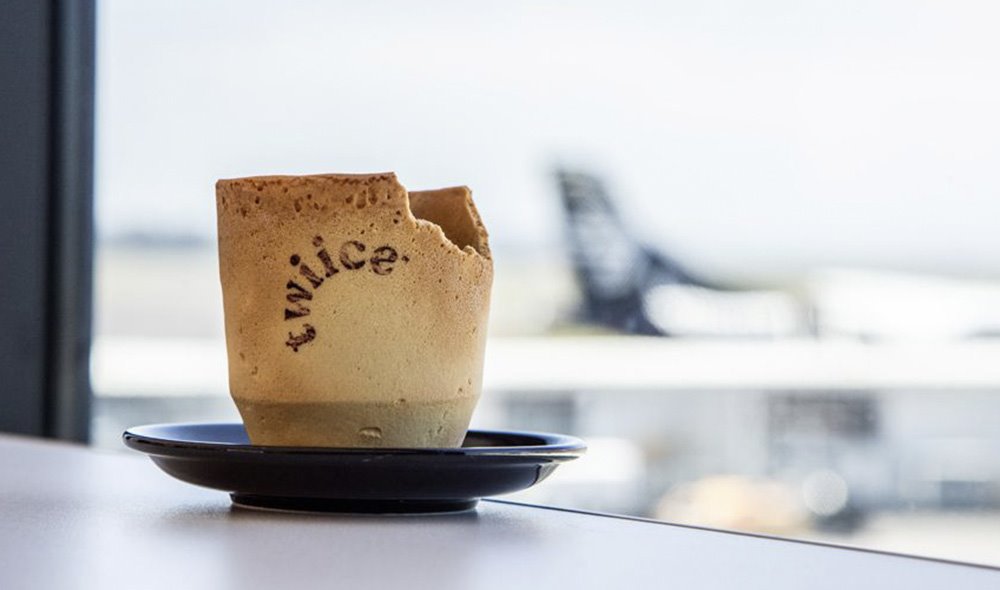 Have you ever thought about eating your cup after drinking your coffee? Air New Zealand is trialling an edible biscotti coffee cup from family-run business Twiice for select customers in the air and on the ground. After finishing the coffee, passengers can actually eat the vanilla-flavoured cup like a normal biscuit.

A spokesperson from Air New Zealand says the airline has been trialling the edible cups in its lounges in Auckland and on some select trans-Tasman flights.

The edible cup is made from wheat flour, sugar, egg, vanilla essence and natural vanilla flavour. Twiice says the cup is leakproof and will “stay crisp at least as long as it takes to drink the coffee, and longer”, though it hasn’t developed a biscuit lid for the cup.

However, those who are allergic to gluten, dairy products or nuts should be aware that the cups contain gluten and may also contain traces of dairy, soy, tree nuts, peanuts and sesame seeds, according to the information on Twiice’s website.

The airline says it currently serves more than eight million cups of coffee each year, and it aims to reduce waste on board with the introduction of this edible cup.

Since October this year, passengers travelling with Air New Zealand on both domestic and international flights have been able to enjoy their hot drinks in plant-based coffee cups. These plant-based cups are made from paper and corn instead of plastic, which the airline says enables the cup to break down in a commercial composter.

Niki Chave, Air New Zealand’s senior manager customer experience, says that while the airline’s current cups are compostable, the ultimate goal would be to remove these totally from landfills.

“We’ve been working in partnership with innovative New Zealand company ‘twiice’ to explore the future of edible coffee cups, which are vanilla flavoured and leakproof. The cups have been a big hit with the customers who have used these and we’ve also been using the cups as dessert bowls,” said Chave.

Jamie Cashmore, co-founder of Twiice, says the edible cups could play a big role in demonstrating to the world that new and innovative ways of packaging are achievable.

He says Twiice is working on extending its edible range of crockery and expects to roll out new products next year.

The company also mentions on its website that “a chocolate-lined cup is on the cards and so is a gluten-free version”.

Niki Chave from Air New Zealand says the airline will continue to trial Twiice’s edible coffee cups and work with the company and other partners to explore scaling options that could make it a viable long-term product for the airline.