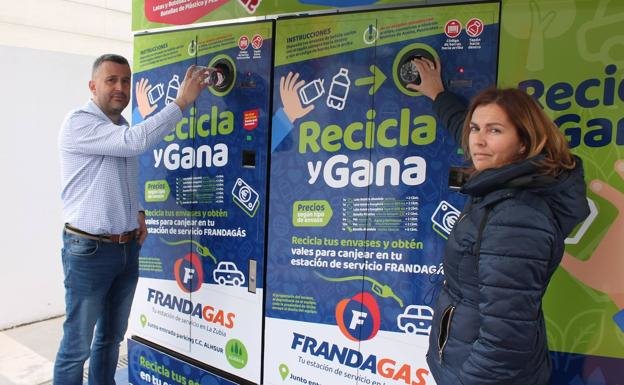 The Frandagas petrol station in La Zubia, Granada has become the first of its kind in Spain to issue discounts on petrol and diesel in exchange for recycled plastic.

Owners Immaculada and Juan de Dios have joined in the country's fight against plastic reduction with their revolutionary new machine. The idea of the machine is that anyone can place unwanted cans and bottles into the machine in return for discount vouchers on fuel and goods in the petrol station.

At the moment, 2, 3, or 6 cent vouchers are issued depending on the type of item deposited and are accumulated over the month to eventually give large discounts on the public’s purchases.The idea, according to the couple, stemmed from a trip to Germany a couple of years ago. “We were in Germany when we began to see that in supermarkets people used machines that gave discounts if a plastic bottle was recycled,” said Immaculada.

They brought the idea home, and with the help of recycling company Ganamos Reciclando based in Murcia, they installed the two machines. Ganamos Reciclando have already supplied similar machines in Seville and Cadiz but Juan de Dios remains proud that his business is the only one of its kind for hundreds of kilometres.

Juan explains that profit margins at the petrol station are extremely low, but they both see this as an opportunity to play their part in helping the environment and encouraging other to do their part in the reduction of plastic use. The station, which sees over 1,000 drivers pass through per day, has invested nearly €50,000 in the installation of the machines but the couple see it as worth every penny.

Similar schemes have also been installed in shopping centres and cinemas in Andalucia whereby users can deposit plastic and aluminium cans in exchange for vouchers to use in high street stores.