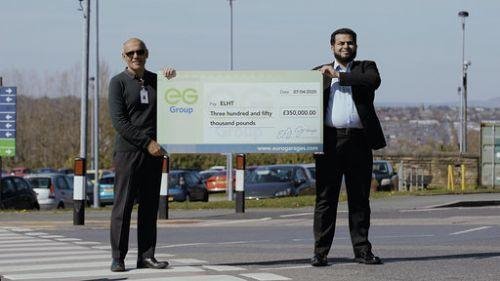 The millionaire Issa brothers have donated £350,000 to hospitals in East Lancashire.

Mohsin and Zuber Issa are the founders of the Blackburn-based EG Group. Zuber made the generous donation to the East Lancashire Hospitals Trust charity.

Executive Medical Director of East Lancashire Hospitals NHS Trust Jawad Husain and Executive Director of Communications Christine Hughes accepted a cheque for £350,000 when Mr Issa turned up at the hospital’s Donation Station. Kevin McGee is the Chief Executive of the Trust. He said: “Wow. This is another amazing donation by EG Group.

“They are a great source of ongoing support to our local hospital network and their help is greatly appreciated. “This donation will make a significant difference to us as we continue to deliver safe, personal and effective care throughout the current crisis, and beyond.”

Mr Issa told Lancashire Telegraph: “Our NHS provides exemplary healthcare given the limited resources. “NHS staff work tirelessly to look after the well-being of the poorly and they do some marvellous work that touches every single member of our community at some point in their life.

“Given the challenging times we are all facing, it has never been more relevant for businesses to show support for this fantastic national institution that makes us proud to be British. “EG Group will remain a committed corporate charity partner for our local NHS hospital network.

“The NHS is a blessing for the community and its staff members are heroes. The Issa brothers founded Euro Garages after they purchased a petrol forecourt in Bury in 2001 for £150,000.

They quickly expanded their business across East Lancashire and the UK, eventually creating Euro Garages. The company’s headquarters are on Haslingden Road in Beehive Trading Park.

According to American financial news outlet Bloomberg, the flotation could take place during the second half of 2020, potentially on New York’s Wall Street Stock Exchange.They value the company at £10 billion, meaning that it would make the Issa brothers’ 56% stake worth more than £5 billion.