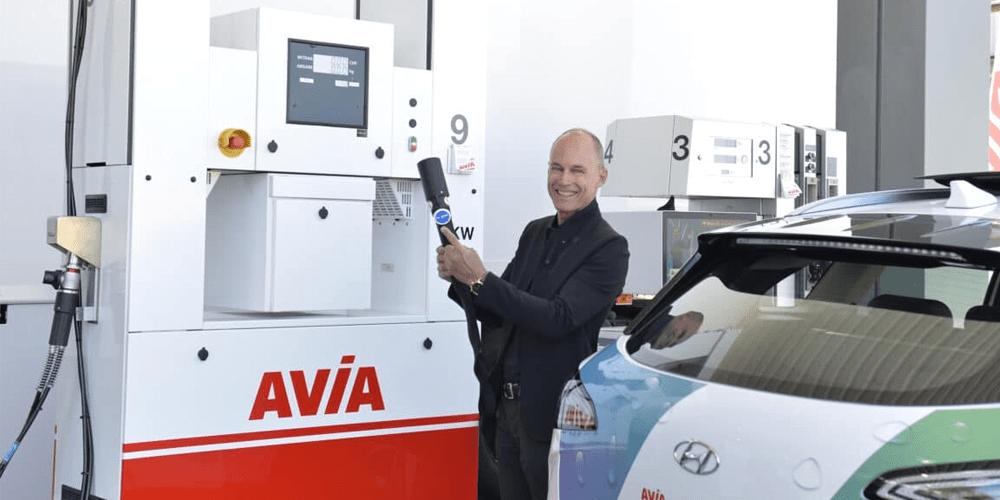 Switzerland’s second public H2 station has now gone into operation with the opening of Avia’s first hydrogen filling station in St. Gallen. By the end of 2020, five more filling station sites are to be built on the Lake Constance – Lake Geneva axis.

Switzerland wants to become a model country for hydrogen mobility. In St. Gallen, the second public filling station will now go online after Coop 2016 in Hunzenschwil. In the coming months, further filling station inaugurations in Rümlang, Hunzenschwil, Zofingen, Bern and Crissier are expected to follow.

All of them provide green hydrogen for commercial vehicles (350 bar) and passenger cars (700 bar). Further scaling will take place from 2021 to 2025 with a total of 1,600 hydrogen trucks and a comprehensive hydrogen filling station network by 2023.

Of the 1,600 planned H2 trucks, the first 50 Hyundai XCIENT Fuell Cells will be received in Switzerland this year. Ten of them have already arrived according to an update published this week. The model is a 36-ton heavy truck.

With the growing network of filling stations, the number of H2 cars is expected to increase in parallel. At least that is the assumption of the Association for the Promotion of H2 Mobility Switzerland, which, after a pilot phase lasting several years, now wants to ramp up the H2 mobility system in Switzerland with its partner companies.

In concrete terms, the private initiatives Hydrospider, Hyundai Hydrogen Mobility (HHM), the H2 Mobility Switzerland Support Association and H2 Energy are working hand in hand on this major project. According to the partners, the basis for the development of H2-based mobility is provided by a business ecosystem that unites various players from the energy and mobility sector in a privately organised system.

Every part of this cycle functions without CO2 emissions, from the energy source to production and use in electric vehicles. As far as the division of labour is concerned, Hydrospider – a joint venture between Alpiq, H2 Energy and Linde founded in early 2019 – is responsible for the production of green hydrogen.

Hyundai Hydrogen Mobility AG imports the aforementioned 1,600 H2 trucks, the members of the H2 Mobility Switzerland Development Association use these vehicles and set up the nationwide refuelling infrastructure, and H2 Energy AG, as a business innovator, operates the central platform for implementing the mobility system.

“What the Swiss private sector is creating here is unique in the world”, comments Bertrand Piccard, a well-known and committed advocate of new technologies in Switzerland. “Many believed that the hydrogen industry would always remain a utopian vision of the future, but Switzerland is proving that electrically powered commercial vehicles and passenger cars can be refuelled with clean hydrogen and driven without CO2 emissions”.

In addition to the development of an economically viable sector, they spoke of a major step forward for the environment with convincing benefits for customers.

“This important moment for the environment was made a reality through the combined expertise of many pioneers who didn’t just talk about possible solutions, but got things done.”, said Piccard, who is, among other things, President of the Solar Impulse Foundation, made a name for himself as a designer of a solar aeroplane and set a new record for the longest distance travelled in a hydrogen-powered vehicle at the end of 2019.