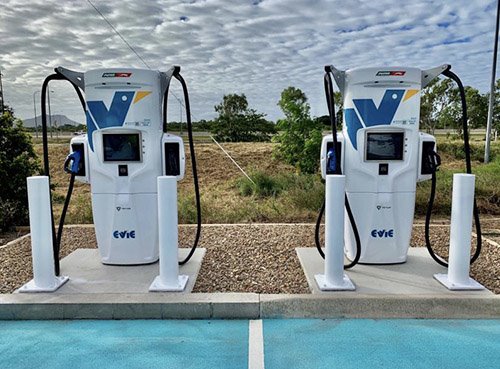 Puma Energy truck stop outside Townsville, Australia is now the site of the first Evie Networks ultra-rapid electric vehicle chargers to be installed under a new deal between the two companies.

Sitting on Bruce Highway, the Puma Energy Cluden service station now features a 350kW DC charger made by Australia’s own world-leading high-powered EV charger company Tritium that can add up to 400km of driving range in 15 minutes.

The ultra-rapid charger is the first in a series planned by Evie Networks which, like Tritium, is backed by coal baron Trevor St Baker’s innovation fund, and Puma Energy, which was very recently acquired by oil major Chevron in a $A425 million deal.

The charger roll-out will further ready Australia’s east coast for a small but gradually increasing number of electric vehicle owners.

Coastal Queensland is already ahead of the electric mobility transition curve, currently serviced by the world’s longest intrastate 50kW DC fast charging network (known as the Queensland Electric Super Highway or QESH). But the new deal will transform 1,800km of the electric superhighway to an ultra-rapid expressway.

Puma’s network of well-placed truck stops was chosen by Evie Networks for its amenities, 24 hour operations, proximity to key corridors, and consideration of safety.

For Puma Energy, the deal means it will be able to “diversify its traditional service station forecourt” to offer charging services to the growing number of electric vehicle owners.