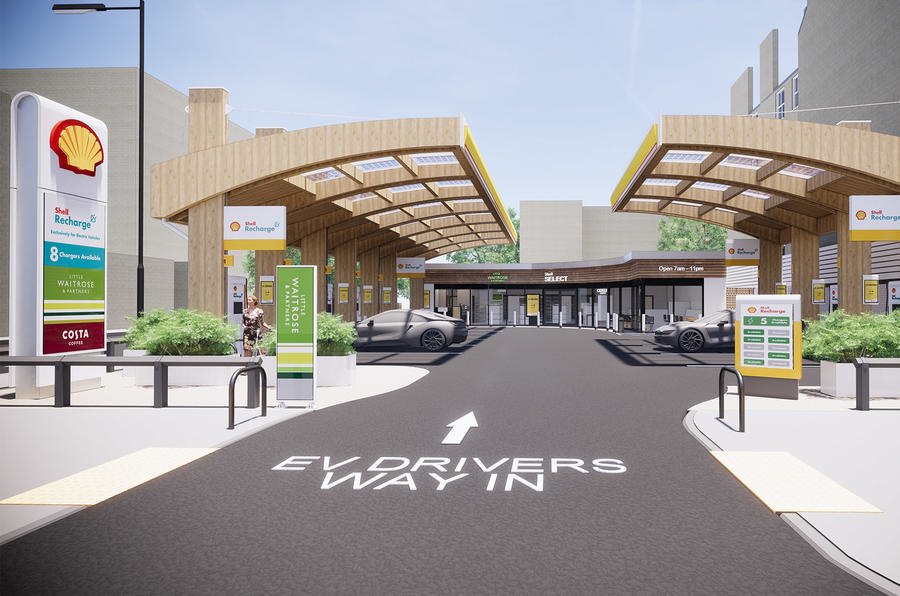 A display board directs you to an available EV charging bay, one of up to 10 150kW ultra-rapid chargers occupying the main forecourt and protected from the elements by a pair of opposing, stylish-looking canopies fitted with solar panels.

Nearby, a Little Waitrose convenience store, a Costa, free wi-fi, a parcel collection point and, holy of holies, clean lavatories. All this and not a petrol or a diesel pump in sight. Welcome to the forecourt of the future, as conceived by Shell. No marketer’s pipe dream, the company’s first all-EV charging station opens for business early next year in Fulham, London.

We call it Project Evelyn – an energy hub where you can recharge yourself and recharge your car,” says Bernie Williamson, general retail manager at Shell UK. “Exactly when we’ll start rolling out more sites on the same lines is hard to say but Shell supports the ban on internal-combustion-engined vehicles and aims to be the leading rapid charger on the go.”

Shell unveiled its first 50kW EV rapid-charging post, capable of recharging a battery from zero to 80% in 30 minutes, at its Holloway Road service station in north London in October 2017. Nine more followed in quick succession.

By 2021, it plans to have a combination of 200 rapid (50kW) and ultra-rapid (150kW) chargers on forecourts located on major routes across the UK. Going forward, all of its new or upgraded chargers will be ultra-rapid. These rapid and ultra-rapid chargers are in addition to the large network of fast chargers available on local roads that are managed by Shell’s NewMotion charging division.

Meanwhile, by the end of 2020, the company plans to have three 350kW chargers in operation, eclipsing Tesla’s 250kW V3 Superchargers. As they do now, all of Shell’s chargers will dispense renewable electricity.

So that’s the car’s battery taken care of, but while you’re waiting, you can recharge yourself with a ‘Jamie Oliver deli by Shell’ sarnie. The upmarket snack range will feature in Shell’s Fulham EV-only service station, highlighting that the forecourt of tomorrow is expected to be more than simply a recharging destination.

“Shell is strong in the convenience sector,” says Williamson. “One in three of our transactions is shopping, not buying fuel. While they wait for their car to recharge, we expect customers to want to catch up with their shopping, have a coffee or, where space allows, do something like click and collect. We call it ‘taking care of yourself and your car’.

“The coronavirus epidemic has proved to be a dress rehearsal for how we see things evolving, with people increasingly keen to do as many things as possible in one place. The fact that over 75% of the population are within 15 minutes of a Shell service station means we’re in a perfect position to help them.”

On that point, the Shell Recharge card and app provide access to 135,000 public charge points across Europe and allow drivers to pay for power contactlessly. Rates change daily (at the time of writing, a kilowatt cost 39 pence, around the upper end of the price spectrum, or 36p for Recharge card holders) and users are encouraged to keep their eye on offers.

Sean Walters, an early adopter of EVs who owns a Mitsubishi i-Miev, Peugeot iOn and Kia Soul EV, welcomes Shell’s plans for solus EV charging stations. He says: “London, especially, needs one since, in my experience, many charging points are occupied by taxis even though they have access to their own dedicated chargers.”

In his enthusiasm for electric cars, Walters thinks nothing of driving from his home near Egham, in Surrey, to Scotland so welcomes more EV chargers at service stations located on A-roads, such as Shell plans to establish.

He says: “Now, instead of parking up at some place with no amenities and twiddling my thumbs while the battery is charged, I’ll be able to have a coffee and catch up on some shopping. Things are definitely improving for EV drivers.”