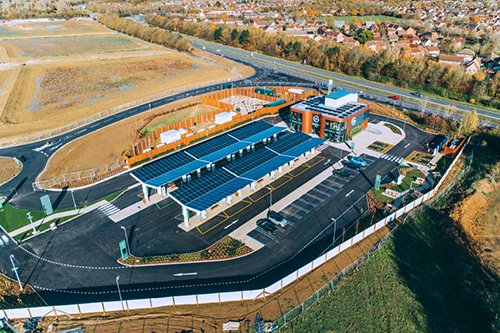 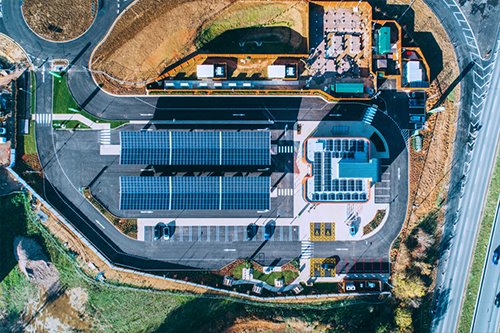 Powered by net-zero carbon energy the Electric Forecourts are hoped to propel mass EV adoption well ahead of the UK’s ban on petrol and diesel vehicles which was brought forward to 2030 last month. 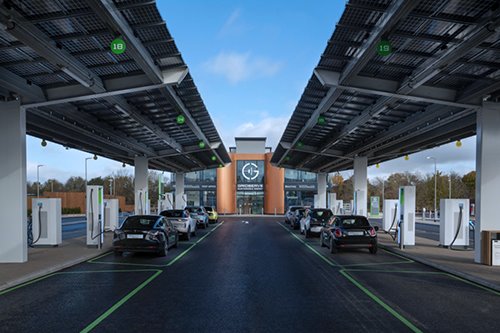 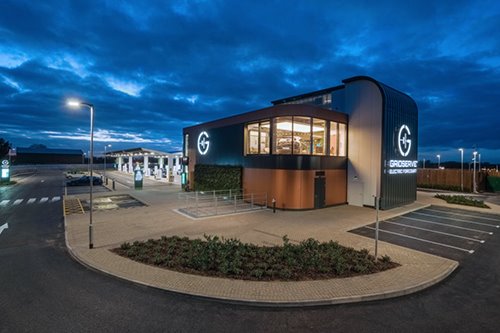 Part of the company’s larger “sun-to-wheel” infrastructure plan which is designed to deliver low cost and net-zero carbon energy to every vehicle that uses one of the company’s chargers, power for the EV chargers is generated from overhead solar power canopies and a network of hybrid solar farms operated by Gridserve.

The £1 billion project received a £4.86 million ($A9.6 million) grant from Innovate UK, the country’s innovation agency, as part of a £1 billion allocation by the UK Government to help roll-out EV charging hubs. The Forecourt project was also supported through funding from Hitachi Capital and OZEV.

This first Electric Forecourt, built adjacent to Great Notley, a suburban development, is located just off the A131 and enables 36 EVs to be charged simultaneously with high high-power chargers that can deliver up to 350 kW of charging power. 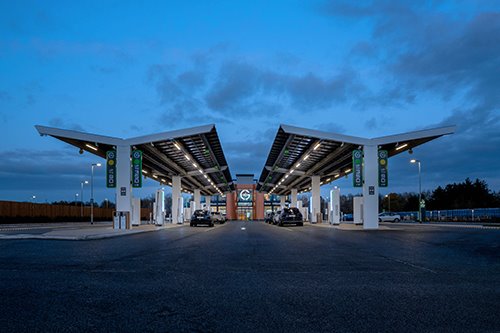 In addition to the onsite solar canopies, there is also a 6MWh battery on site which helps balance the local energy grid and shift energy to periods when it is more valuable.

As an example, Gridserve explains that “on windy winter nights the battery can store enough energy to drive 24,000 miles in electric vehicles the following day, helping to maximise the value of renewable energy resources, stabilise the grid, and keep prices low.”

Importantly, drivers charging their EVs at the Electric Forecourt will initially pay just 24p ($A0.43) per kWh of energy (including VAT), which is currently the lowest ultra-high power charging rates on the market. This means that an average EV charge from 20% to 80% will cost consumers under £10 ($A18) for an average-size electric vehicle.

“However, charging has to be simple and free of anxiety, which is why we’ve designed our Electric Forecourts entirely around the needs of drivers, updating the traditional petrol station model for a net-zero carbon world and delivering the confidence people need to make the switch to electric transport today – a full decade ahead of the 2030 ban on petrol and diesel cars.

“Together with our charging-included electric vehicle leasing business, that we are also launching today in partnership with Hitachi Capital (UK) PLC, people now have the full confidence to make the transition to an electric vehicle, knowing that charging is in-hand, and it’s actually less expensive to use an electric car than a petrol or diesel alternative.”

In addition to the charging infrastructure, the Electric Forecourts will also be home to retail and food stores, as well as a waiting lounge with free WiFi, washrooms, dedicated children’s areas, business meeting room pods, and even an area with exercise bikes that generate electricity.

The retail space will be host to a “Best of British” line-up of stores including WHSmith Travel, Costa Coffee, Booths, Post Office, and Gourmade.

Additionally, the upper floor of the Electric Forecourt onsite building will showcase the latest electric vehicles and will provide consumers the opportunity to learn about and even source electric vehicles.