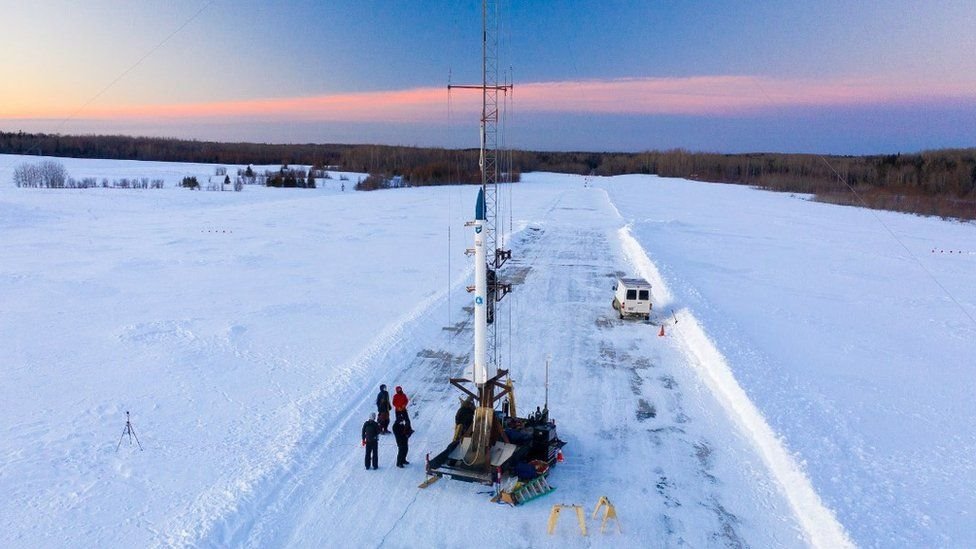 Stardust finally lifted off, becoming the first commercial launch of a rocket powered by bio-derived fuel. Sascha Deri, who invented the biofuel, is cagey about what it's made of, but says it can be sourced from farms around the world.

The founder and chief executive of bluShift Aerospace, he and his team have spent more than six years refining the formula and designing a modular hybrid engine, which is also unique.

"We want to prove that a bio-derived fuel can serve just as well, if not better in some cases, than traditional fuels to power rockets and payloads to space," he says.

"It actually costs less per kilogram than traditional rocket fuel and it's completely non-toxic. And it's a carbon-neutral fuel which is inherently better for our planet and more responsible."

But because it's relatively cheap to fly and doesn't need the high-tech infrastructure of larger rockets, it will help make space research accessible to more people. Students, researchers and businesses will be able to conduct experiments and test products with greater control and frequency.

"Right now there are freight trains to space like SpaceX and ULA - and there are buses to space, like medium size rockets," says Deri. "They're taking thousands of kilograms to space. But there's no space launch service allowing one or two payloads to go to space. There's no Uber to space. We want to be the Uber service to space."

For the first launch, the payload included a high school experiment and tests on an alloy called nitinol made by Kellogg Research Labs in Salem, New Hampshire.

Founder Joe Kellogg says nitinol is a shape memory material that is used in medical devices such as stents. It is also used to protect rocket payloads from vibrations.

"We're very heavily involved in space and trying to get into the larger missions like the lunar missions and the Mars missions that are coming up. Our long-term goal is to build whole rockets out of nitinol," he says.

"We think we can make them lighter and more energy efficient."

While Stardust flew just one mile into the sky before parachuting back to Earth, a second planned rocket will be suborbital and a later version called Red Dwarf will enter polar orbit.

Polar orbits offer more exposure to land than equatorial orbits. And Maine is geographically suited to such launches which makes it attractive to the growing space satellite communication industry, says Terry Shehata, executive director of Maine Space Grant Consortium which is funded by the US space agency Nasa.

By some estimates, small satellite launch services could generate $69bn (£50bn) within the next decade. bluShift alone expects to create 40 new jobs in five years through launching tiny satellites known as cubesats.

Maine already has the infrastructure to support the industry, says Shehata. At the height of the Cold War, Loring Air Force Base at Limestone was the nation's front line of defence. B-52 bombers armed with nuclear warheads constantly circled the skies on high alert to deter any threat from Russia. Stardust launched from the base's three-mile runway of reinforced concrete and was temporarily housed in a hangar built for fighter jets.

The base closed in 1994, with devastating economic effects on the region. Other former bases include Brunswick Landing which could become Mission Control for a statewide spaceport complex.

"Maine has the right resources, we have the people, we have the geographical advantage of being able to launch into polar orbit. All we need to do is believe in ourselves that we can do this," says Deri.